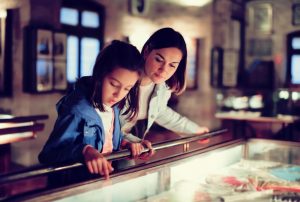 Spend a Fun-Filled Day at the California Museum

Nestled in downtown Sacramento is a fascinating destination that tells the story of California's storied history.

The museum is just nine minutes from our apartments near Sacramento State. There is much to see, and permanent exhibits include:

Created by Los Angeles-based artist George Yepes, "The Promise" is a 70' mural depicting California's transformation into the 31st state. It took seven months to paint and is found on a vaulted ceiling on the first floor. The painting incorporates Aztec, Greco-Roman, and modern symbols. Viewers will also spot the state animal: the California grizzly bear.

This unique exhibit is the only one of its kind in California. Using artifacts, original art, and oral histories, it details the historical and cultural legacies of more than 100 tribes. Display highlights include baskets, a fur cape, and a chipped stone bear (a prehistoric artifact).

The California Hall of Fame was created by the museum and former First Lady Maria Shriver. Its mission is to honor people who have made their mark on history. The inductees have come from all walks of life, and have made achievements in fields such as education, sports, and public service.

The 31st Star display chronicles the tumultuous years leading up to California becoming the 31st star on the U.S. flag. It features rare items including historic photographs, maps, and documents from the Monterey Convention of 1849.

The museum is open Tuesday through Saturday, and adult admission is nine dollars.

The California Museum is just one of the cultural attractions around our apartments near Sac State. If you're looking for a place to call home, please contact us. We will gladly give you a tour of our vibrant community where you can see firsthand all we have to offer.