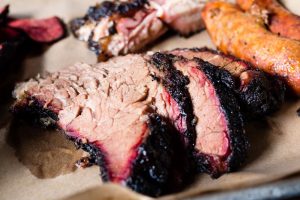 Where to Enjoy the Best Barbecue in Sacramento

Did you know that barbecuing has a complicated history?

Some believe that the Spaniards developed this cooking method, while others claim the French invented it after Caribbean pirates landed on the country's southern shores.

If you would like to enjoy some barbecue, the best restaurants around our apartments near Sac State include:

Texas West boasts that it's the place for "True Q." The restaurant is known as Sacramento's landmark barbecue joint, and it welcomes everyone from politicians to celebrities. The pitmasters have perfected their art, and they use the perfect combination of smoke and spices. Guests enjoy fast service, and photographs of the famous visitors adorn the walls. Offerings include baby back ribs, Memphis pulled pork, and hot links.

When Mack Thomas dreamed of opening his own restaurant, MacQue's Barbecue was born. He spent many nights in the kitchen perfecting his marinade and barbecue sauce recipes. His family and friends were the taste testers, and today, Mack's creations are enjoyed by locals and visitors alike. The restaurant's cozy setting features old photographs and tables covered with red and white checkered cloths. Meals include pork ribs, beef tri-tip sandwiches, and smoked ham.

JR's has been a local favorite for the last 32 years. In the 1980s, JR was working as a roofer when he met a Texas barbecue man. He realized the guy's grill looked similar to his tar pot, and thought cooking barbecue would be easy. He created a few recipes which were tested by local roofers and contractors. They all agreed, it was the best barbecue they had ever had. That's how JR's was established, and it has been named "Best Barbecue" by Sacramento Magazine six years running. Offerings include sliced beef brisket sandwiches, baby back ribs, and pork shoulder.

To become a resident of Academy65, please contact us. We would love to schedule a tour of our apartment community where you can see firsthand all we have to offer.